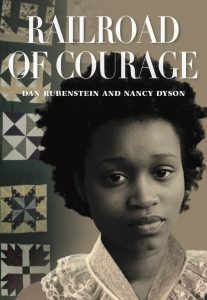 “Railroad of Courage”(Photo: Courtesy photo)
CONNECTTWEETLINKEDINCOMMENTEMAILMORE
Poughkeepsie native Dan Rubenstein has co-authored a young reader novel with Nancy Dyson about the Underground Railroad that begins when Rebecca, a 12-year-old slave in South Carolina, overhears that her father will be sold to another grower.
Aimed at children ages 9-12, “Railroad of Courage” is an action-packed story about Rebecca who travels from North Carolina to Canada, under the wing of Harriet Tubman, known as Moses, who helps her to trust “Friends,” freed blacks and other abolitionists who are a vital part of the Underground Railroad.
LOCAL AUTHORS: Family fractured as refugees during WWII in ‘Roads’
“The runaways hide in coffins, ride in a handmade raft through alligator-infested waters and narrowly escape from a burning steamboat that runs aground near St. Louis,” Rubenstein said via email. Many American abolitionists appear in the pages, such as Philo Carpenter, Lucretia Mott and the founder of the first all-black village in America, Patricia Baltimore.
Rubenstein said he got the idea for the story one cold winter night as four of their grandchildren huddled around them. He told them about his childhood search for a secret passage at the Poughkeepsie Day School, which during the 1950s was housed in a rambling 3-story house which was rumored to have a hidden room, a place where runaway slaves hid on their way to freedom in Canada. He and his friends spent hours searching the building but never found the secret passage, he said, but he kept a mental image of that hidden refuge in his mind.
Rubenstein, who is the son of the late Hudson Valley artist Lewis Rubenstein,who taught at Vassar College, said their grandchildren “were shocked as they learned about slavery, but as the story of Rebecca evolved, the tale became one of hope and courage.”
For more information on the book, visit http://rubenstein-dyson.com/
If you are a published author who lives in the Hudson Valley and would like to be included in the “Local Authors” feature, email a press release about yourself and your latest book to life@poughkeepsiejournal.com. Please put “Local Authors” in the subject line. Questions? Contact Community Content Editor Barbara Gallo Farrell at 845-437-4979.
http://www.poughkeepsiejournal.com/story/life/2017/10/25/railroad-courage-taps-into-dutchess-history/798854001/

← Book Launch – Oct 21, 2017 at Books on Beechwood
Book in Chapters/Indigo Stores across Canada →

7 Comments on “Article about Railroad of Courage, Poughkeepsie Journal”